“The spiritual father of the Jewish State, Theodore Herzl…”

Theodor Herzl was born on May 2, 1860 in Budapest and died on 20 July 1904 in Vienna. He was a journalist, jurist, writer, playwright and statesman, who developed the idea of ​​political Zionism and founded Zionism as an institutionalized national movement. He was considered the “Spiritual Father of the State “, by the Zionist movement, the Yishuv in the Land of Israel and the Jewish public throughout the world.

Since the First Zionist Congress in 1897 and until his death, Zionism became a significant and dynamic political and practical movement. Herzl’s ideas found an echo among European Jewry and reached Jewish communities all over the world. After the Second World War the support of the masses of Jews for the ideas of Zionism increased, and led to waves of immigration to Eretz Israel. Together with the political struggle of the Jewish Agency, they ultimately enabled the establishment of the State of Israel.

According to Herzl’s will, a modest funeral was held for him and he was buried in the Jewish cemetery in Doblingen, near Vienna, in the family grave where his parents and wife were buried.

“I wish to be buried in a metal coffin near my father,

And to lie there until the Jewish people

Will transfer my body to the Land of Israel.

The coffins of my father and my sister Paulina, who was buried in Pest in 1878, will also be transferred

Of my coffin to the Land of Israel. “

Protocol containing a description of Herzl’s will (page 188).

The reburial of Herzl in Jerusalem

On August 10, 1949 the First Knesset passed a law, which decided that the Israeli government and the World Zionist Organization would cooperate in bringing Herzl’s coffin to Jerusalem for reburial. On August 17, 1949 Herzl’s coffin, together with those of his wife and parents, were buried in a state ceremony on the mountain which was called Mt. Herzl after him.

Certificate regarding reburial of Theodor Herzl in Israel, 12 August 1949, presented to Vienna’s Jewish community by the government of Israel and the Zionist Executive

The Speaker of the Knesset read out the speech of President Chaim Weizmann, who was unable to attend the event.  He was followed by Prime Minister David Ben-Gurion:

“…Herzl is immortal, his tombstone is the State of Israel, which will be built and will grow in love with its sons and builders….Herzl’s reburial ceremony in Jerusalem was not a procession of mourning but a journey of victory, the triumph of the vision that became reality.” 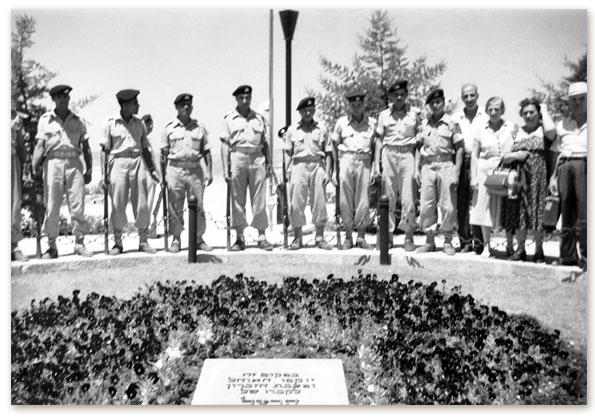