The “Mizpah” photograph album: a gift for the High Commissioner

On July 1 1920 the first High Commissioner for Palestine, Sir Herbert Samuel (1870-1963) arrived in Jaffa. Samuel was a British Jew who had served several times in the government. He had helped to acheive the Balfour Declaration and his appointment was seen as an expression of the government's will to establish a Jewish national home in Palestine. On June 30 1925, Samuel finished his term and returned to Britain. His son Edwin (1898-1978) served in the Mandatory government and was a senior civil servant and university lecturer in Israel after 1948. Edwin Samuel deposited a rich collection of documents and photographs in the ISA about his and his father's activities.

One of the most beautiful items in it is an album called MIZPAH, a Biblical name symbolizing a bond between people who are separated. It contains 51 high-quality photographs and three pages with 78 signatures. Many of these signatures are of members of the American Colony in Jerusalem, founded in 1882 by American Christians. One of their occupations was photographing Palestine, and later descendants deposited the negatives of their photographs in the Library of Congress. Apparently the album was given to Samuel as a parting gift.

The “Mizpah” photograph album: a gift for the High Commissioner 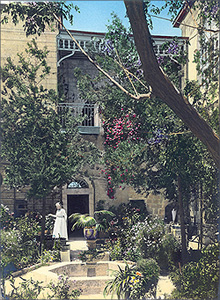 Mrs Anna Spafford, the founder of the American Colony

The Mizpah album is bound in suede leather and the pages are connected by a white drawstring. It contains 51 photographs and three pages with 78 signatures. 47 photographs are in black and white, and have a white border and caption at the bottom. They are followed by two images in colour, one showing a view of the Sea of Galilee and Mt. Hermon and the other showing Anna Spafford (1842-1923), the founder of the American Colony, in the courtyard of the building which is now the American Colony hotel.

The cover of the album

The last two photographs in the album are unusual. No. 50 (Herbert Samuel in front of the Augusta Victoria building which was then the High Commissioner’s residence) is a large photograph with an inscription on the back reading “Waiting to shake hands with the guests after the ceremony, Jerusalem July 7”. This probably refers to the induction ceremony on July 7 1920, at which Samuel read a letter from the King to representatives of the communities in Palestine. 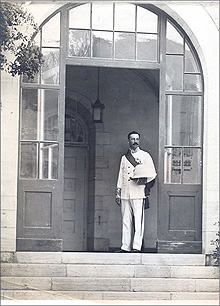 Sir Herbert Samuel in front of the Augusta Victoria building

Photograph 51 shows the Zionist Commission for Palestine and the inscription on the back gives a list of its members, dated April 4 (probably 1918). It was taken at the Lydda (Lod) train station when the members of the commission were on their way to Jaffa and Tel Aviv. These two photographs do not have a caption. 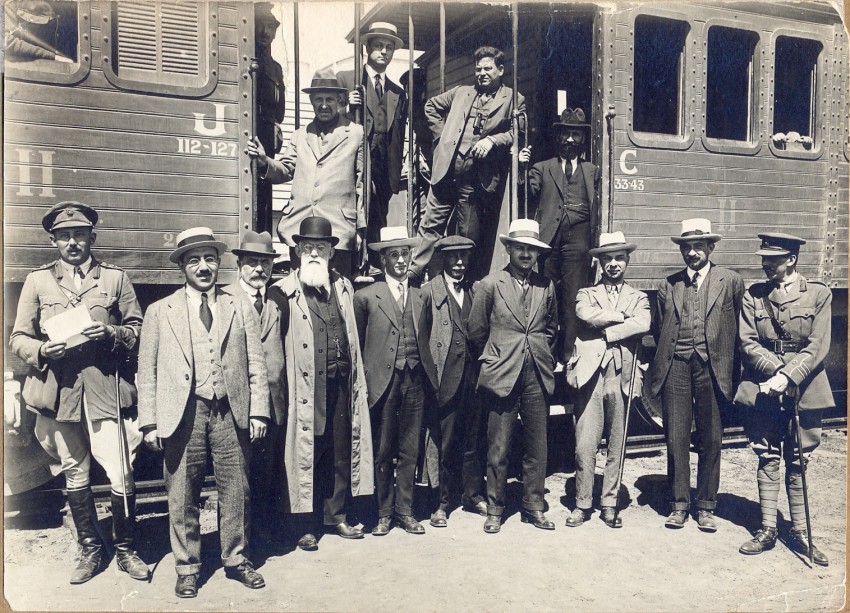 We believe that the initial arrangement of the album was by topic rather than chronological. We see traces of this organization by topics such as Jerusalem, Trans-Jordan, Jaffa and Tel Aviv, the establishment of the British government, landscapes etc. It was probably disrupted when the album was dismantled for taking pictures and reassembled incorrectly. Photographs 50–51 were added at the last minute. 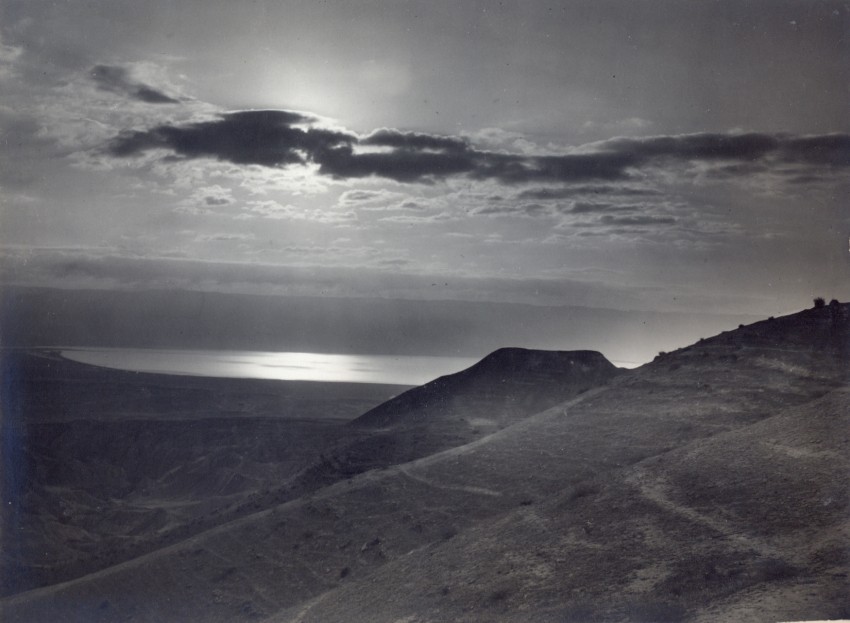 View of the Dead Sea 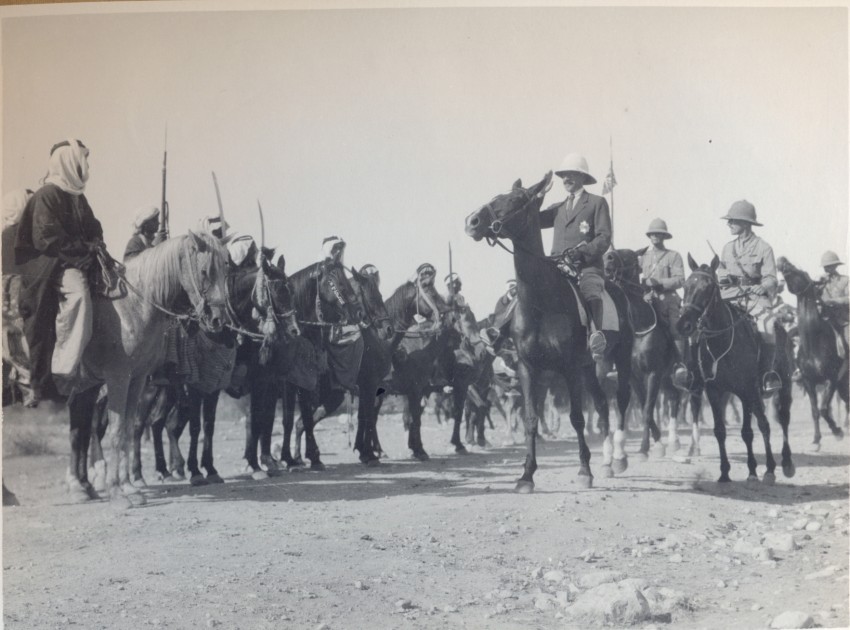 Sir Herbert Samuel on the way to Es-Salt in Transjordan

Most of the photographs were taken during Samuel’s term of office. Two are earlier: the surrender of Ottoman Jerusalem to the British (9 December 1917) and the visit of the Zionist Commission (4 April 1918). We found no photographs dated later than April 28 1925 (the military cemetery in Gaza). Some of the titles and dates are incorrect. For example, the date that appears under Photograph No. 7 of Winston Churchill (March 1920), is wrong – it was taken on March 29 1921. 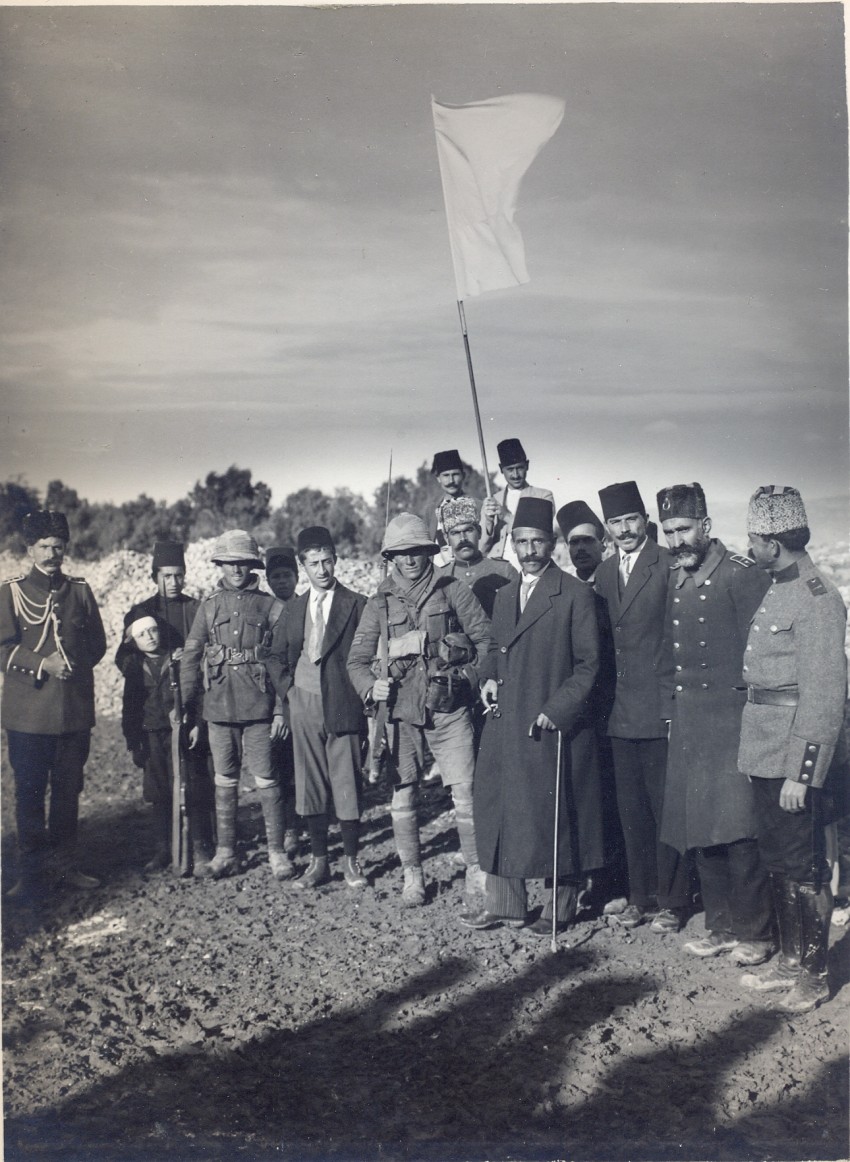 The surrender of Jerusalem to the British: the mayor with two British soldiers 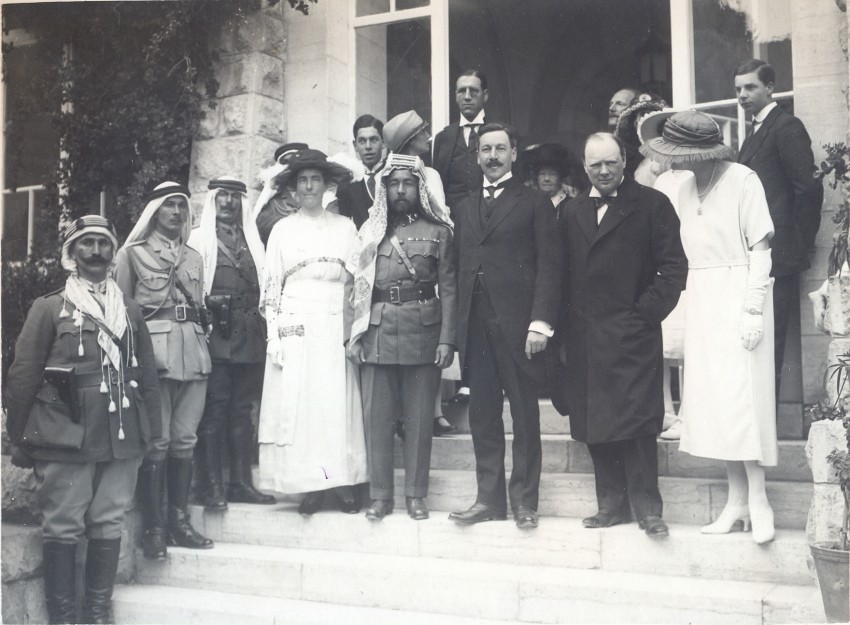 Winston Churchill in Jerusalem, with Sir Herbert and Lady Samuel and Emir Abdullah of Transjordan

The visit of Colonial Secretary Churchill to the Middle East
In March 1921 Churchill called a conference in Cairo where it was decided to separate Transjordan from Palestine and to install the Emir Abdullah, brother of King Faisal of Iraq, as its ruler under British control. Afterwards Churchill met with Abdullah and Sir Herbert Samuel in Jerusalem. In 1923 Samuel announced British recognition of the independence of Transjordan, but it remained under British protection. 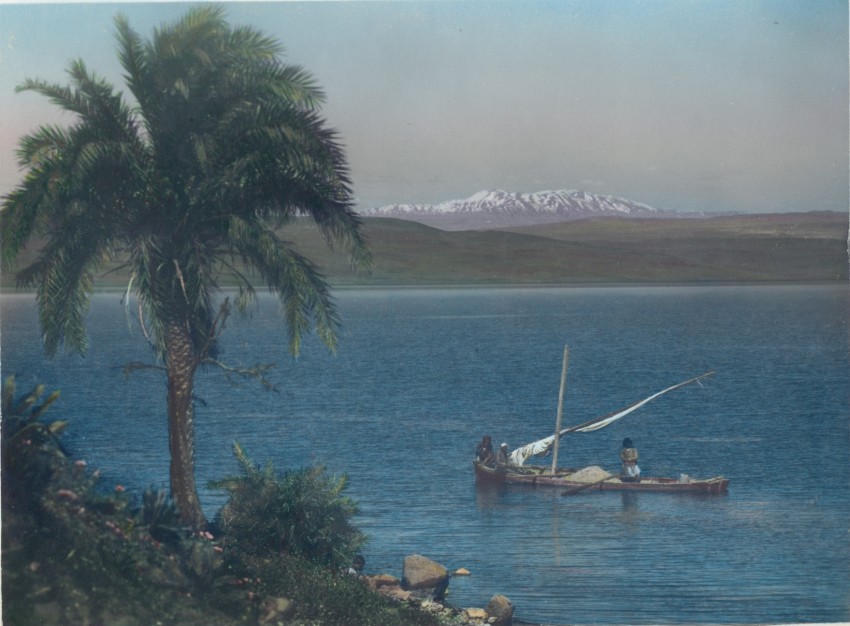 View of the Sea of Galilee with Mt. Hermon

Type your question and press ENTER to begin your search